Warning: check for elevator before stepping in.

More than almost anything on the bestseller list, Mad Men lends itself perfectly to literary analysis—certainly the ol’ reliable high school English quinquepartite of Plot, Character, Symbolism, Theme, and Setting. Mad Men’s premise could have been a simple soap opera—the same boring story of a handsome man who is more than he appears, and his affairs, in every sense of the word. But instead, Mad Men has consistently, in the mantra of every fiction writing workshop ever, excelled in showing more than telling, using ambiguity, implication, narrative structure, and design to draw the viewer in, to force us to read closely. And for me what makes Mad Men great is that, like the best novels and poems, it evokes multiple, simultaneous feelings. The problems, and the pleasures, arise when these feelings seem to contradict each other, creating a frisson, a sense of ambivalence.

But I think the clips also show the opposite: the “What?”s are distinct and surprisingly diverse, in different takes conveying interest, surprise, incredulity, annoyance, distress, anger, reluctance, dismissal, inquiry, dejection, or disbelief.

Even more complexly, look at Don’s facial expressions during the opening episode of Season 5, as his second wife Meghan dances Zou Bisou Bisou in front of him and his colleagues, during a birthday party that everyone except Meghan understood that he didn’t want.

In this scene alone, which went viral immediately after the show aired, we see, and ourselves feel, Don’s ambivalence: the complexity that protocol demands a happy and flattered husband—going by Roger Sterling’s and Youtube viewers’ comments, the obvious response—while at the same time, he is trying and almost but not quite succeeding in not looking mortified. Don wants people to see him as the active seducer, and he is visibly uncomfortable being made into the passive spectator—that is, in some ways, feminine object of seduction. Yet at the same time, as returning viewers know, behind closed doors, he likes pain and humiliation, being made the object. (Warning: link is steamy.) So: Don likes but is embarrassed by the dance because Meghan has confused Don’s ironclad distinction between public and private. And I wonder if viewers feel something like that also: the dance is funny but genuine, goofy and embarrassing but sexy, a gift from a woman who seems not to know her new husband at all but may in fact know him better than he knows himself. She  doesn’t care what other people think—and doesn’t want Don to, either. But he still does. Whew.

And to get all this, viewers need to remember and piece together dialogue and images from previous episodes, often previous seasons, in order to understand what we’re seeing now. If anything, this season has, like the best novels, married the form of the story with the content, so that, in one of the more overt examples, a recent episode centering upon Roger Sterling’s LSD trip is narrated out of chronological order, making the viewer feel the slight sense of something askew from the very beginning before realizing that the chronology itself is trippy.

Yet I think Mad Men’s setting has been its initial attraction. And the era—in Season 1, about 1960; by now, in Season 5, 1966, the year the Beatles’ Revolver was released—like everything else in the show, evokes mixed reactions from the viewer. On the one hand, it’s easy for us in our enlightened presentism to respond badly to the raging yet casual sexism, lazy knee-jerk racism, and stifling cultural ignorance. One of the best gags this season was the simple display of rampant smoking at the benefit for the American Cancer Society. On the other hand, it sure looks glorious, and I did not find myself disgusted by the constant drinking as much as nostalgic for it, despite that I never got to experience it (although I’ve found myself drinking more cocktails since I became a fan). Why else launch a whole Banana Republic Mad Men line? 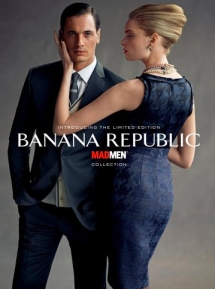 Or entice viewers with a Mad Men Yourself feature? The opening page asks you to choose “Suit” or “Skirt,” another example where the line between reality and synecdoche is blurred. 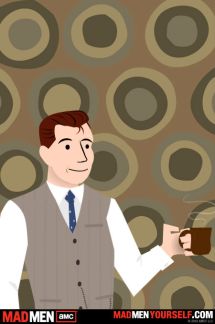 This is me on Mad Men. Vest and coffee are accurate. Face and hair less so.

And this cultural moment, 1960-1965, remains under-recognized. For Gen Xers and after, the 1960s has been synonymous with one year: 1969. Yet on Mad Men, we get to see that the supposedly radical moment, when the stodgy grey flannel suit ‘50s tuned in, turned on, and dropped out, didn’t happen overnight, or over a year. The way most of the characters on Mad Men understand their tumultuous time is the same way that we still do today—through the media, through the same images that the ad men traffic in themselves. For most of the characters, the seemingly transformational impact of riots, mass murders, or wars overseas comes to them through television, newspapers, and radio, background chatter, subtext that seeps its way into the text itself, not the times a changin’ as much as a perceived anomaly. As Roger asks, in typical Mad Men dramatic irony, “When are things going to go back to normal?”

In the end, the show has managed to balance social realism with literary symbolism, which is usually the big turnoff for the average reader. (From many of my students’ course evaluations: “Does EVERYTHING have to mean something?” I wonder what they mean by that?) “Don Draper” is a seemingly innocuous, believable name, yet it is also the perfect symbolic, literary name for a character who has assumed the name and identity—even, self-referentially, this exact name—of another man. “Don,” as a noun, means a man of great importance; as a verb, to put on or dress in. A “draper” is a merchant who sells cloth; “drape” means cover, hand, arrange, or adorn. As viewers come to understand, “Don” dons Don and sells yarns, as he assumes and covers his original name and identity, Dick Whitman. And like his literary namesake Walt, Draper né Whitman very well contradicts himself. He contains multitudes. And through Mad Men, we get to hear America singing.

* Gad: to move restlessly or aimlessly from one place to another: to gad about.

Time: OK, eighty minutes. Next time I SWEAR to keep it to an hour. 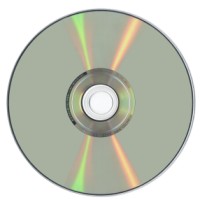 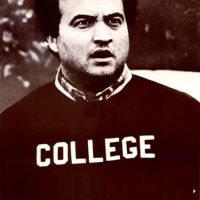 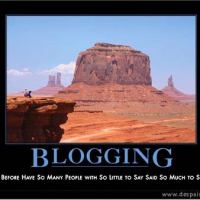 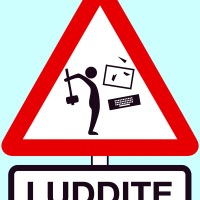